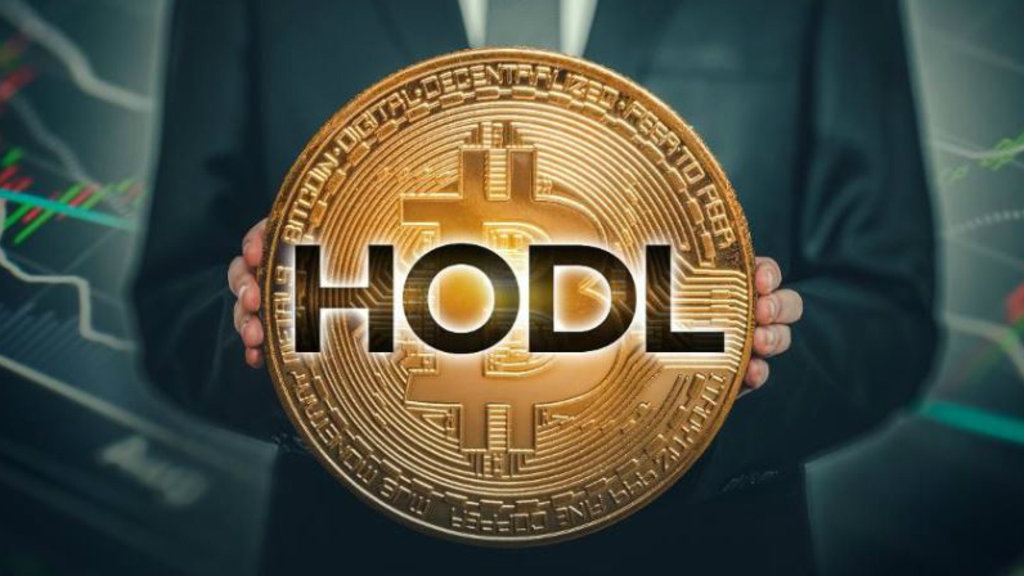 HODL is a term that was created from accidentally misspelling “hold,” in relation to buying and then holding Bitcoin and other cryptocurrencies. The phrase has also become popular among cryptocurrency investors, shorthand for saying “hang on tight.”

The term originated from a 2013 online post to the Bitcointalk forum. At the time, Bitcoin’s price was volatile, spiking up to $950 in December from just $130 earlier that year in April.

The poster advised individuals not to sell and that they should “hodl” or store their funds.

On Dec. 18 at 10:03 a.m., Bitcointalk online forum user GameKyuubi posted an angry, Typo-ridden message about the user’s bad trading skills and determination to simply hold his Bitcoin from that point on:

I type d that tyitle twice because I knew it was wrong the first time. Still wrong. w/e,” GameKyuubi wrote about the now-famous misspelling of “holding.” “WHY AM I HOLDING? I’LL TELL YOU WHY,” he continued. “It’s because I’m a bad trader and I KNOW I’M A BAD TRADER. Yeah you good traders can spot the highs and the lows pit pat piffy wing wong wang just like that and make a millino bucks sure no problem bro.

According to GameKyuubi, the best option was to hold since “You only sell in a bear market if you are a wonderful day trader or an illusioned novice. Traders can only take your money if you sell. He then apologized for having had some whiskey and pondered whether or not it was spelled whisky(e). Within an hour, “HODL” had become a meme.” The first HODL GIFs referenced the classic action films 300 and Braveheart, but there are now hundreds of HODL memes on the internet.

HODL has become a popular meme in recent years, and the Game of Thrones character Hodor is frequently invoked.

HODL, as an acronym for “hold on for dear life,” has become a meme among cryptocurrency investors to signify a long-term approach to cryptocurrency investing. This attitude is comparable to GameKyuubi’s assertion in the original article that novices are likely to make mistakes while attempting to time the market and should instead HOLD their coin.

HODL is more than a meme for cryptocurrency maximalists; it represents an entire strategy for controlling FOMO (Fear of Missing Out), FUD (Fear, Uncertainty, and Doubt), and other profit-besieging emotions. Long-term crypto HOLDERS keep their investments because they believe that cryptocurrencies will one day take the place of government-issued fiat currencies as the foundation of all economic systems. If this happens, the exchange rates between cryptocurrencies and fiat money would lose relevance to crypto investors.

A meme from ‘The Matrix’ explains the HODL philosophy perfectly. Neo asks Morpheus, “What are you trying to tell me, that I can trade my Bitcoin for millions someday?” and Morpheus replies confidently with,”No Neo, I’m trying to tell you that when you’re ready … you won’t have to.”

HODLing is now, always, and eternally the greatest time to HODL based on these ideas. A true believer would never let go of their assets, even if the market falls or becomes extremely turbulent. HODLing becomes a matter of faith when it comes to long-term prospects for blockchain technology, cryptocurrencies, and the communities that have developed around them.

Although HODLing is mainly connected to cryptocurrency investors, the strategy of investing by buying and holding onto assets is not only restricted to crypto.

Many stock investors “HODL” their stakes for lengthy periods of time, although stock prices are usually less volatile than the prices of crypto assets. Long-term price appreciation and reduced price volatility are among the advantages offered to investors in stocks who purchase and hold.

Hold On for Dear Life, or HODL, is a term commonly used in the cryptocurrency world that refers to holding onto your assets rather than selling them. This can be done for multiple reasons such as waiting for the price to go up or simply because you believe in the long-term success of the asset. The acronym first gained popularity during the early days of Bitcoin when prices were highly volatile and investors felt like they had to hold onto their Bitcoins “for dear life” in order not to lose money. Since then, the term has been adopted by other crypto communities and now usually refers to holding any kind of cryptocurrency.”

“HODL” is a message board in the cryptocurrency world, and it stands for “Hold On for Dear Life.” It’s a term used in the crypto industry to describe a method of holding on to bitcoin assets throughout price fluctuations and volatility. A Binance forum user made an error when typing the word “holding.” Bitcoin maximalists are notorious for employing this phrase, which is similar to traditional buy-and-hold investing. HODL may also be used to refer to Binance Coin (BNB). Users may get bonuses in Binance coin by depositing their funds into a liquidity pool.